Most Pacific Central American Marlin hotspots are well known by traveling billfishermen.The drop, off El Salvador.The rock,off Suenos.Zane Grey Reef,Pinas Bay Panama.And of course the infamous HANNIBAL BANK Pan. to name a few.However this locale just a few miles from the Panama border in CR is rarely exploited.Not on any chart this spot pioneered by Marlin Legend Capt.Tom Lynskey of Golfito via Miami is off the radar.Under threat of dismemberment I can’t divulge the numbers,but if heading east and you have Burica Island about 4 miles dead ahead,your close.The huge visible rocky area on the CR side of the island(it’s a grey area which side of the border your on) holds big virgin Roosters. The seamount gave up a 100 inch class blue here march 09 on standup for Inta on Thumper with Capt.Tom on the wire. J.W.and Pat Bones of Port Aransas,Texas/GOLFITO took a grander here new years eve 07.I sneak in here reguarly and it rarely disappoints.The 512 foot deep Volcano near the 1000 fathom line drives upwelling and visible current lines with tons of bait in residence. A good recorder will pick it up(Deep drop freaks will find black grouper the second they hit bottom).Mostly Blues with an occasional Black the rig here is bait and switch @ 8 knots. Aggressive Pacific sails are thick mostly to the north side of the structure and will enthusiastically come to the teasers.The drop off Punta Burica is rumored to be the spot for swords however the prevailing current will drift you into Panama so if you don’t want an Whiskey Tango Foxtrot moment get your butt back over the border before dawn.It’s 41 miles from Golfito so a doable day trip.This post will self destruct in 15 seconds…..

I thought you guys were going to Golfito to WORK on Thumper? I hear you’ve been fishing non stop.I’ll be in Wednesday and the boat better be shining inside and out or I’m kicking me some ass. 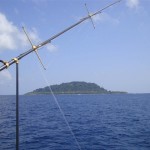 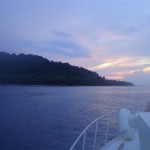 This structure is often bypassed by traveling fisherman, instead opting for the world famous black marlin grounds,Banko Hannibal nearby.Just off the Island and it’s long string of rockpiles to the west all pelegics dwell.However, for me the magic is the inshore action.This southern most outcroping sitting 60 miles offshore, hard on to the 500 fathom line,is a food chain utopia.A viable anchorage off the northern sandy beach (except on a north wind) in 10 fathoms will put you over a nightfishing cornucopia(you can see bottom).Always keep a nite watch as fast current,shifting winds and 15 foot tides can cause havoc with your ground tackle.Utilize a variety of light sources and after a few hours of chumming/ chunking the water off the transom transforms to a Pacific version of the Baltimore aquarium.Nice big live baits(locally called torpedos) on subuki’s can be circle hooked off a rigger or fished under a balloon and bottom fished on a slider rig.Don’t forget to load up the livewell as these same baits are pelegic candy out on the grounds.Drop down some chunk baits for the sweet Rock Snappers,Blue Trevallies and ass kicking Cubera.A skiff here is a huge advantage for throwing surface poppers like the Yo-Zuri Sashimi Bull(strengthen the factory hook rig) on the shoals and/or putting ashore(you can always swim in).If you are so inclined day drifting in 100to120 feet just west of the shoals produces huge African Pompanos, mullet snappers(look like a 20 lbs.red striped bass),yummy triggers and other non-stop action.The 400 acre Island is totally protected and is a pristine palm fringed vision with NO ONE THERE but you.Sorry,no blackberry service.Shhhhhhhh,don’t tell anybody. 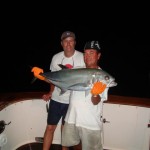 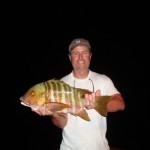 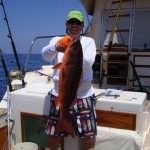 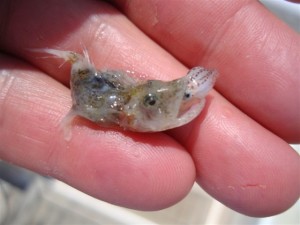 Food Chain! Baby squid eaten by small predator take from the stomach of a Mullet Snapper.

February 15, 2010, our second day on the grounds. Water temperature 90 degrees(la nina year), locals have moved in shore looking for action as only one marlin has been raised in the last five days. Our first day produced yellowfin on live bait, Mahi on poppers, a few sails but no marlin. We’re running an all big plastic bait and switch spread today as any meat in the pattern is immediately demolished by the huge Mahi. At 8:05 AM we have a Marlin up on a short rigger teaser. To be kind, lets write that one off to AE. We add some hooks in the spread and at 8:55 AM a Black annihilates a jumbo Moldcraft chugger red and black with a number 12 J hook stiff-rigged off a short rigger. In 40 seconds she has 600 yards and we’re in chase pointy end first on plane till we catch up with just ten turns left on the Penn30W.In 20 minutes we gained 3/4 of the spool and we’re in full backdown when the fish goes deep and dogs. We get the beast up in 40 minutes, she’s tail wrapped and drowned.We should have broke her off as soon as she wouldn’t run. We spend 20 minutes trying to revive her, finally tying her off and pulling her at 8 knots for an additional 15 minutes with no sign of life. There happens to be a small local panga on the grounds bottom fishing. We sterned up to the father and his wide eyed young son and helped them load her on to their boat and they head in with an old man and the sea vibe. Many thanks to Charley P. and Chris D. for a valiant effort to save her. That’s the sport, that’s fishing. It happens, man up. 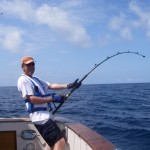 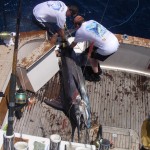 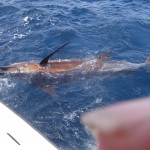 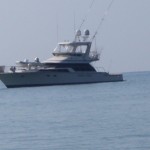 It’s Tuesday morning, February 16 and we’re 80 miles off the coast of Panama, having drifted all night swordfishing. At first light we fire the MAN’s, set out the hard marlin troll spread and head in towards the grounds at Banco Hannibal. I’m up top checking the instruments, position, etc. when out of the corner of my eye I spot a panga with four guys, machine guns, and black ski masks coming on @ 50 knots. In 15 seconds they’re alongside and the first guy is already onboard. 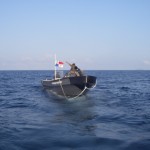 Here’s a quick rundown of Harry’s daughter Maya’s trip with friends so far:

We took Thumper out into the Golfo Dulce on Monday for a quick test run before leaving on a big trip on Tuesday. We bait fished for an hour and caught a ton of Blue Runners, but no Jacks, Roosters, or Snook. We headed back and got diesel and groceries and made a pretty early night of it.  Cap’t Ronnie fired up the boat around 5 a.m. on Tuesday morning and were out and fishing by about 6:30. We fished north toward Drake Bay, but didn’t catch too much: Justin pulled in a nice sail, Jer got a Dorado (Mahi Mahi) and Maya had a little Bonita (a small type of tuna). The Dorado made great eating for a couple of days, though, so it worked out perfectly. We stayed the first night in a small bay called Aquacaste (maybe?) just before Drake Bay.  We anchored, did a little swmming, tried for some Snapper, had another great meal of Dorado courtesy of Cookie (Jeremy), and turned in early.

We headed out on Wednesday and fished all day, but basically got skunked. Actually, both the girls got Bonitas, but they’re not good for much beyond bait.  We anchored at Drake Bay Wednesday night, as our friend Johnny was set to meet us there in the morning.

We had a leisurely morning Thursday before taking the dinghy to shore to get Johnny. He was waiting right on the beach when we arrived! We cruised through the village a bit and picked up some extra supplies and then headed out to Isla del Caño. We fished our way out, but didn’t get much action and then anchored off the island, which is a pristine nature preserve and diving/snorkeling destination.  Everybody climbed in the water and had a nice snorkel before heading back for dinner. We suffered through some pretty rough seas before Cap’t Ronnie decided to head back out and get us to calmer waters. We headed back toward Golfo Dulce and woke up to much calmer seas.

Friday was our day for fishing: Everybody but Maya caught a sail and we got another Dorado. We headed back to Golfito, had the kitchen at the marina cook up our Dorado, and had a nice relaxing evening.

That brings us to today. Everybody slept in a little bit and caught up on sleep. Our friend Beto, the first mate of Thumper, is going to take us over to Zancudo for a few hours this afternoon. We’ll meet up with Cap’t Ronnie and we’ll see what develops.

Here are some pics:

It’s been almost two years to the day since us kids have been in Golfito and it’s nice to be back! We brought along some good friends. We’re provisioning for a trip out to Isla Caño and Drake bay where we’re going to pick up our good friend Johnny who’s flying in from DC on Thursday. Here are some pics: